As you may recall from our previous article, Springfield pupils put on two fantastic performances of ‘The Greatest Show’ last week.  The play was based on ‘The Show That Goes Wrong’ and featured songs from Les Miserables and The Greatest Showman.  Pupils put together this unique show themselves and should be proud as they all performed brilliantly.  Well done to all the pupils and staff involved. We have been delighted to receive some great feedback and include some comments below:

“We all enjoyed the show and it was really good to see the cast having such a good time.”

“It was a beautiful performance!  Well done everyone!”

“I thoroughly enjoyed it, and thought that as the kids created so much of it, it was particularly great!  I thought it flowed well as a story, and the differences between their rehearsal scenes and the Les Mis sections were really well done.  I love that they took the premise of The Play That Goes Wrong and really rolled with it, and loved the Les Mis songs - there’s some fab young actors there, and their improv skills must have come on tonnes since they started rehearsals! I would never have had the confidence to put myself out there in a production like that at their age, so to see so many of them getting involved is so fantastic!”

“I am writing to congratulate your team on their performance of The Greatest Show last night. I was very impressed at how the students took on the format and demonstrated not only huge commitment as performers but in developing the show themselves. I think that this can only benefit their understanding of how a production works, not only in terms of the logistics of the performance itself but of the other aspects such as tech and staging/props. What a brilliant educational experience for them.  The students were clearly enjoying the show which made it very enjoyable for us in the audience and I found myself in stitches on more than one occasion! I am only too aware of the huge amount of time and effort that it takes to produce a show, the hours of rehearsals after school and at weekends, and your staff must be so proud of the cast. It was very brave of Mrs Brown and Mrs Needham to allow the students to play them in the show and I think that this was done with great humour and respect, indicative of the excellent rapport that they have clearly built with the youngsters. There was some real talent on display last night and everyone gave their all, which was wonderful to see and hear.” 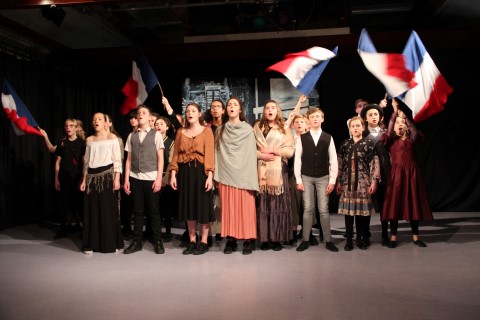